Officer Sean Collier was ambushed and murdered in Cambridge Massachusetts by two terrorists that were eventually captured/ killed in Watertown Massachusetts. Officer Collier responded to a report of a disturbance and never had a chance to get out of his cruiser. 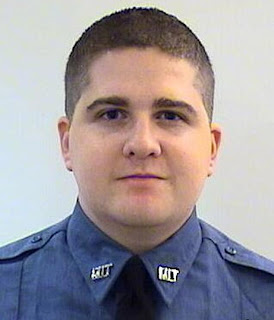 Sean walked up to my office in 2008 and knocked confidently on the door.

I am a Police Officer at the Somerville Police Department since 1986 and I have been assigned as the Information Technology Officer since just after September 11, 2011.

I motioned Sean in and he introduced himself and shook my hand. Sean was confident and carried himself well. After speaking with him for a short period of time I realized that Sean had real potential and agreed to let him complete his internship for Salem State College in my office. After a short period of time it was evident well beyond what was taught in college. Sean was already a member of the Somerville Auxiliary Police and was excelling there as well.

Sean spoke often of his family and it didn't take Sean long to bring up his brother who was working for NASCAR teams in North Carolina. Soon after that his brother, Andrew landed a job with Hendrick Motorsports and Sean was very proud. I have several pieces of NASCAR memorabilia from NASCAR in my office as I have been a NASCAR fan for many years and Sean and I talked about NASCAR frequently.

After Sean's internship ended, he still came into my office at least once a week, just to help out. Soon a job opened up for a records clerk and part time IT assistant and Sean was hired for the job from a large pool of candidates.

Sean worked with me while he attended the Transit Police Academy and till he was hired by the Massachusetts Institute of Technology  (MIT) Police in 2012.

Sean was more than a co-worker, he was a friend of mine and because of the age differences I tended to treat him like my third son. Sean and my youngest son are the same age. I was proud of him as I am my own sons. He was paying his dues as he climbed the ladder to become what his lifetime goal was. To be a police officer at the Somerville Police Department.

Sean was in the process of being hired as a police officer for the Somerville Department in just a few short months.

The world was a better place with Sean Collier in it and his supreme sacrifice in keeping our world safe and secure will never be forgotten.


Matthew 5:9 “Blessed are the peacemakers, for they shall be called sons of God."
Posted by Unknown at 9:52 AM No comments: